Oregon Page
Welcome to my Oregon extreme climbing page. This  is where I learned to climb. I have a deep romance with the place as a result.
Oregon”Backwoods”climbing has a very distinct edge of adventure to it. Though it may be an acquired taste(and skillset), those who enjoy it can reap great rewards. Be careful here though , The rock isn’t always great.
Always carry extra gear to get down, and wear helmets. 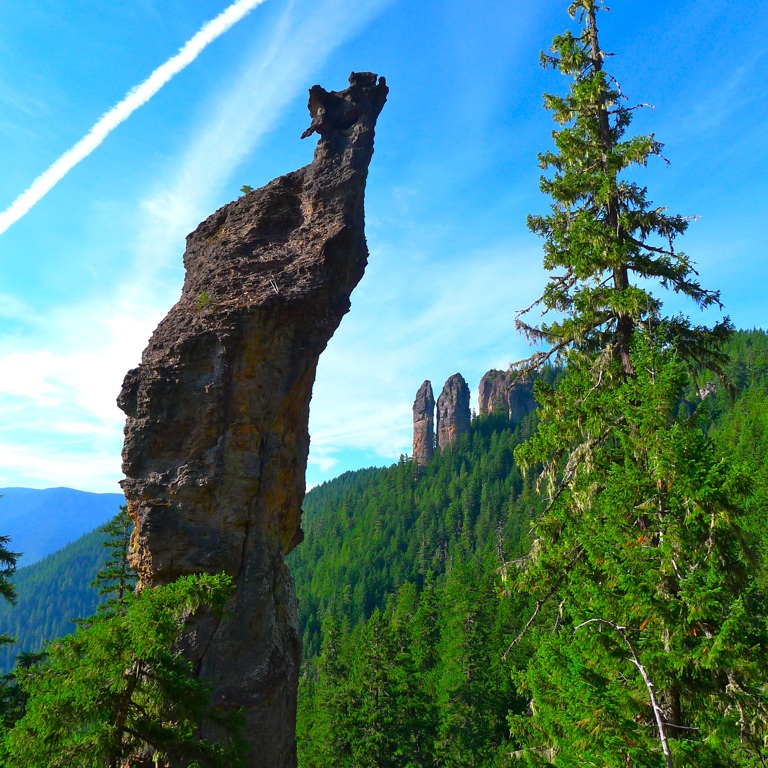 St Peters Dome bit:
It was June of 94, right in the middle of my divorce. I went on a series of near suicidal climbing trips to test my mortality. An avalanche ridden solo on Johannesburg, an 80 foot unbelayed fall off Wind mt. .Eventually a solo of St Peter’s dome was the only success on the trilogy of trauma. The Dome was a great climb. Finding the start and good anchors was a challenge. When I got to the start ledge I was greeted by a selection of railroad spikes . They came in handy for the belay and one of my first aid placement. Working my way up on bugaboos exclusively, I was convinced for a long time that I was off route. There were no pin scars  to be seen. I later realized that an entire layer of rock had worn off since the last ascent in the 70s. Watching the blocks shift as I pounded, I could see how this happened. After a short free finish to the crux pitch, I found the belay sings rotted off the bolts and sitting on the ledge with the rap ring still through it. The traverse was exposed yet easy . The final pitch was difficult to find and very loose, When the angle eased off it became a foot thick carpet of moss. I tunneled under it for holds until it could support my weight. The summit was exhilarating and a forest had grown there that wasn’t in the old time photos I had seen. The register was a fascinating history of  those who dared the venture. As time wore on, I copied all the entries and enjoyed this amazing and exclusive summit . The descent was uneventful until I heard voices in the forest across from me. It seemed Bud Young was leading a party on the Mystery Trail. What an unlikely party we had at the saddle. Truly a bright spot in a difficult part of my life.
Part of a Mazama Annual Journal.

Update On St.Peters Dome!!The Big SPD got its (approx,) 20th Ascent!! Here is the Trip Report on Cascade Climbers!

Right before Christmas in 2005 The Columbia River Gorge became windy and cold enough to freeze its many waterfalls. One of the unclimbed prizes was a route behind Ainsworth state park. It  had seen many strong attempts, including one where Bill Price and I reached within 30 feet of the top.
During the brief 05 cold spell I looked at the route through binoculars, only to see Marcus Donaldson about to finally be the first to succeed on the amazing route.
That left only one unclimbed route to do: The Black Dagger (photo). I rushed back to Portland to tell my friend Lane Brown of our new plan. It included him buying new ropes , and us leaving at 4:00 am to try this extremely steep and exposed water course. As you can see the ice cicles do not reach the bottom of the cliff. In complete darkness I led up the loose rock and moss to the right . The way left evidence of previous attempts both to the right and straight on. A steep mixed traverse allowed me to reach the ice proper . With Lane and I committed now , we struggled up its overhangs and busted away the many smaller icicles that impeded progress. Most waterfall ice climbs are tucked away in corners or gullies. The Dagger is out on a prow, offering a steep and tremendously exposed position. 3 wild  pitches left us feeling like the climb had given us a tough go, but at the top we found the easy looking finish to be very tiring.
Reaching the top was so much more than a consolation for missing out on Ainsworth. We both agreed it was perhaps the best ice either of us had climbed. Our joy was cut short however on our last rappel down when one of Lane’s new ropes got stuck. Going with our new-found luck though , He got it back days later when the pillars melted away.
Lane confided when he took the picture , that he may not have been willing to try this route if he had previously seen it!

Oregon has a surprising amount of adventure climbing, as well as sport climbing. It is conveniently located between other great states for climbing. Often overlooked as a result, it does make a great place to live and play. Enjoy Oregon !!