When we found out that Goats Beard was in, all other plans were shelved.
Once I was off work and the ice formed, what busy plans they were. It started in Canmore for 5 days. Back to Seattle for a day, then Hyalite for 8 straight. A night at home, then Leavenworth then, Lilooet , …you get the idea. I came home from the latest trip to low temps, and many messages from wanting partners. . Shaun asked me to join him in trying Drury Falls, A route that comes in nearly every year, and stays in until the temps or avy danger goes up. Shaun was game for the new Goat-oriented plan which was to be his 1st multi-pitch ice route and 3rd ice route overall. Worried about the routes objective hazards, we were comforted by reports of 2 parties having success on it the days before our try. Reports of hanging daggers overhead all day, and double with sunlight made sleep uneasy the night before. A 3 am wake-up from Shauns house in Leavenworth, and a 700 am start on route. We were stunned by the first light on the route. Earlier that summer, I had done a 7 pitch 5.11 route just next to our waterfall! We were impressed that there was a way through the giant roofs guarding the top forest. It had to be one of the longest, and more importantly-,Funnest ice routes I have ever done. We were like kids at the playground of our dreams. Though Shaun and I were at opposite ends of our career, and had barely met, We were newborn to the world and grateful for life, instantly and forever connected by this thread of temporary ice. Thanks to his roommate : Heidi, ..Vern and Craig for having the cahones to do the onsite, …John for the reassurance, …Shaun for the solid effort on his first big ice route…. Christina and Pro Mt Sports for the hardwear.
We did the route in 6 LONG pitches, 6 hours car to car. We found the first crux to be a long wi5 (p2). the other cruxes were the section through the roofs( a clever, thin corner in the middle of giant roofs, p5). The last pitch was an endurance pillar that took my last shred of energy, p6. The ice was greatly varied in type and consistency, adding yet another element to the intense experience. The route is never super difficult, but the position is always on your mind. It saw 3 ascents in 3 days, and thanks to the internet, it may see more until it falls apart.

pics are in reverse order. 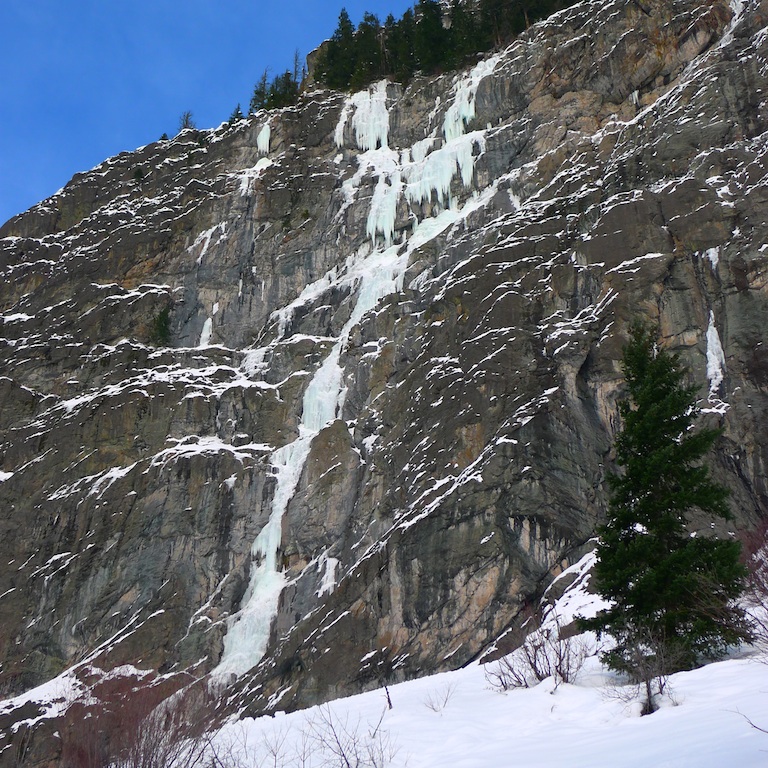 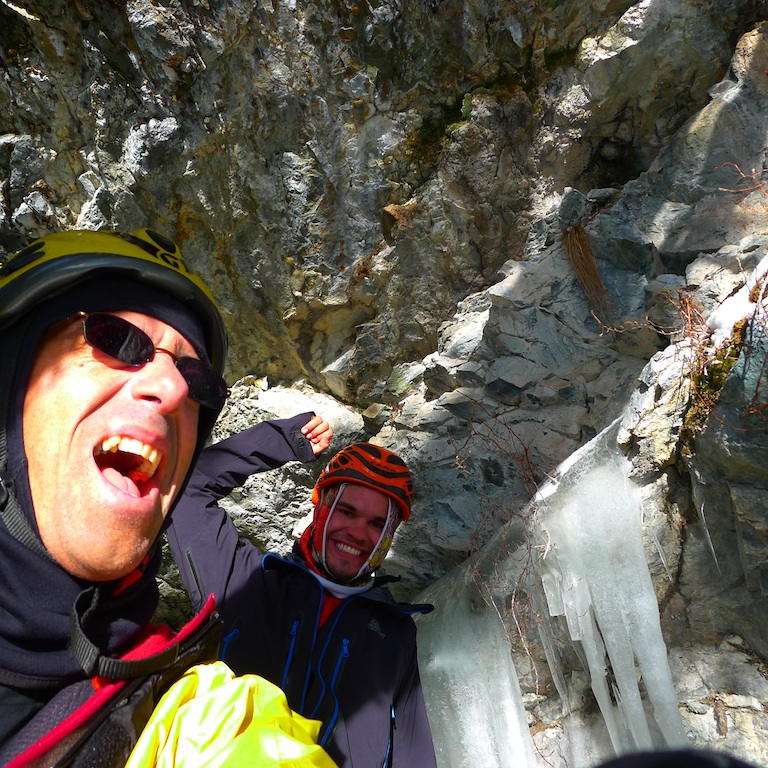 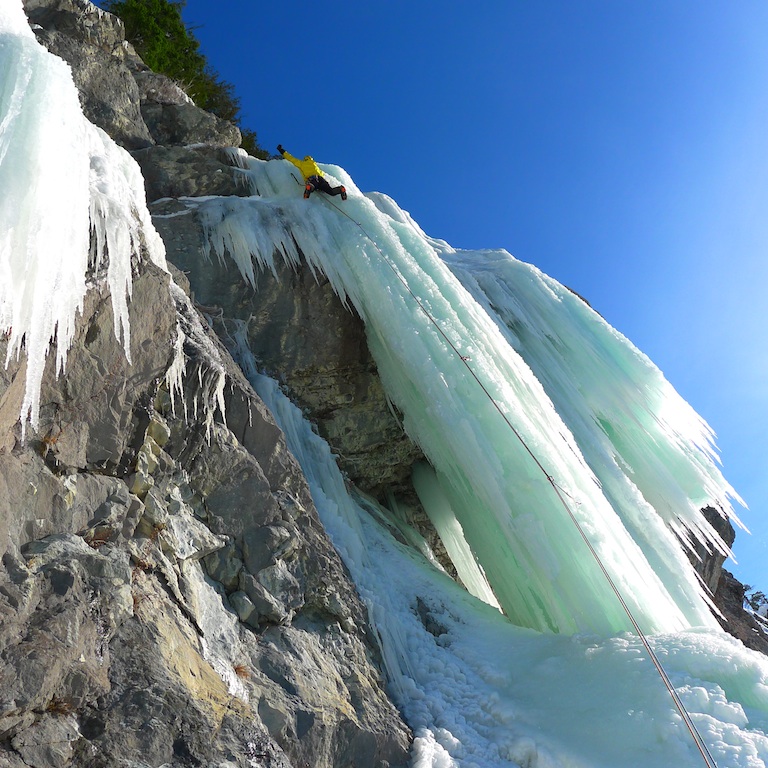 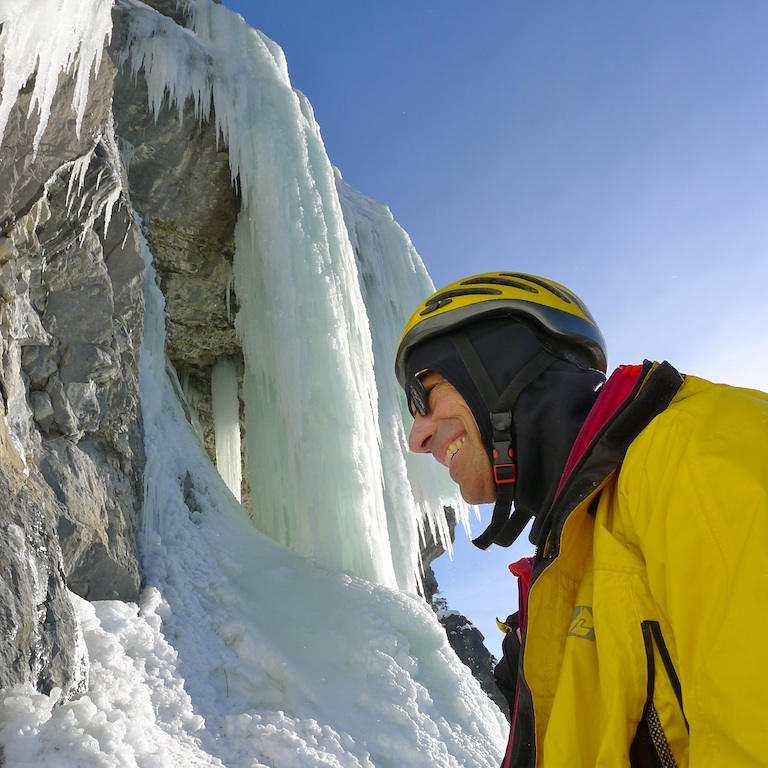 Psyching up for p6 wi5 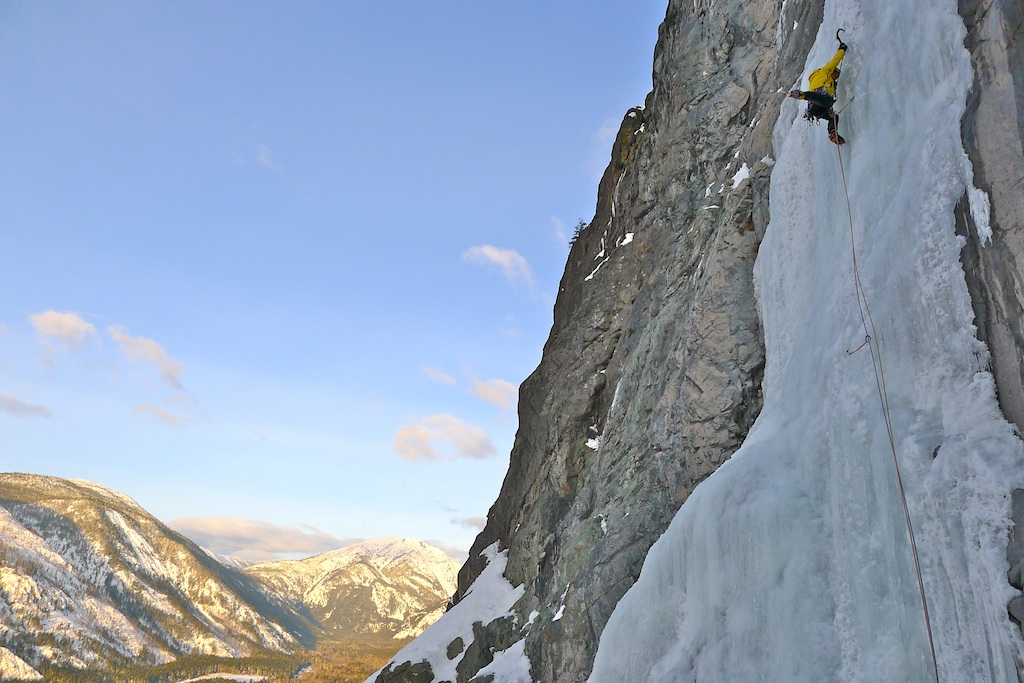